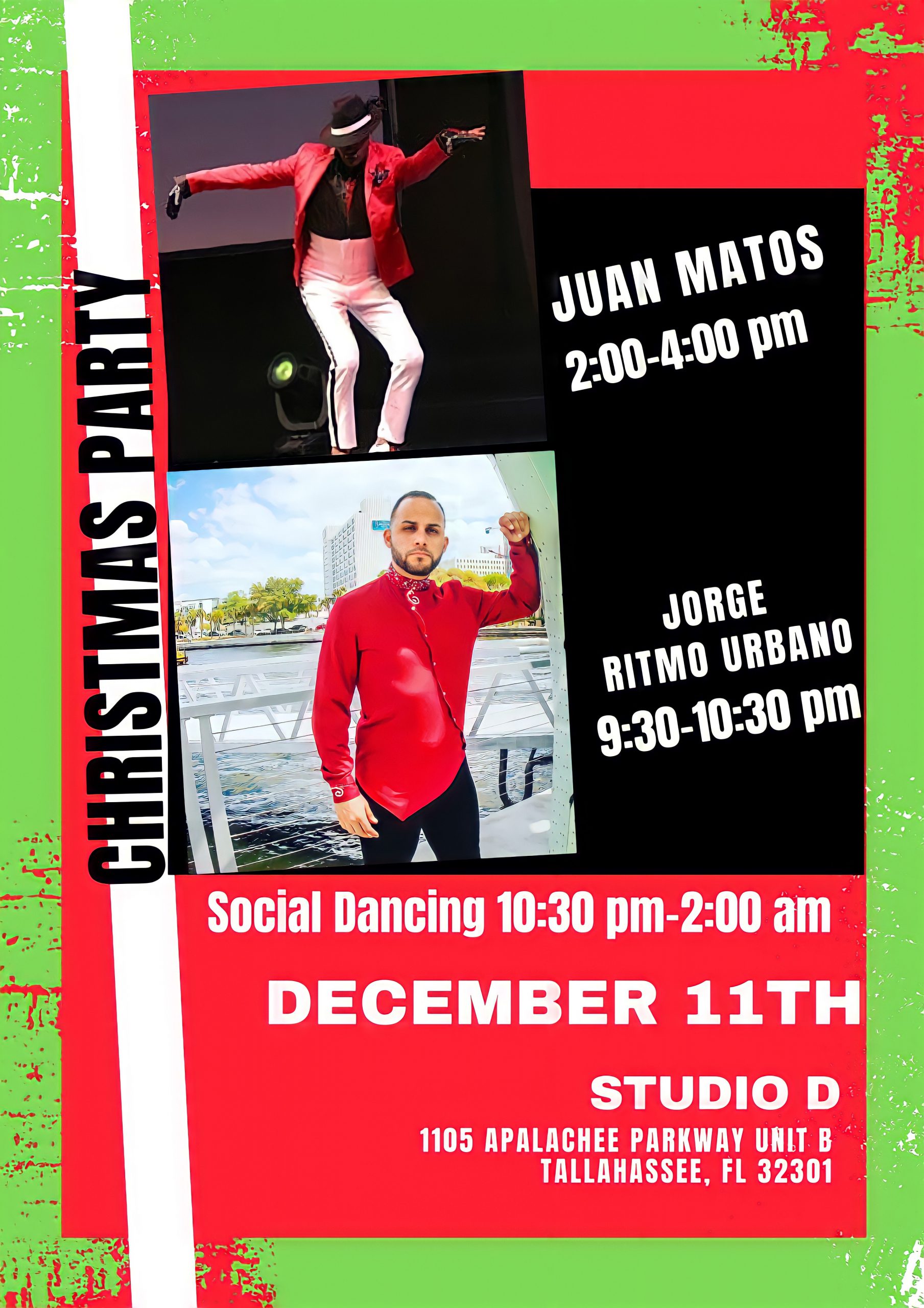 Prices go up December 1st. Get your passes now for December 11th
Studio D Christmas Party Tallahassee, Florida
Our Christmas Party is a salsa versus bachata event. We will feature 2 workshops, buffet, performances, and social dancing. Our featured artists are Juan Matos and Jorge from Ritmo Urbano.
Juan “Pachanga” Matos, born in Santo Domingo, Dominican Republic, came to the United States in April of 1996. Within three years he became one of New York’s top male dancers. In Santo Domingo, his parents were the leading hustle dancers and they inspired him to dance.After attending classes with Victor La Magica Pacheco, Juan danced with companies including Magic Combination Dancers and Santo Rico Dance Company.
Juan developed what is now called “Pachanga style.” This unique style is what got him noticed amongst New York’s mambo scene. Juan is considered to be one of the best and hottest dancers of his generation. He will be teaching a 2 hour workshop and social dancing with our dancers that night.
Jorge is the founder of Ritmo Urbano in Tampa, Florida. Ritmo Urbano is dedicated to bringing the world the art of Latin Dancing through team performances and instruction. Since the company’s origin in 2011, Ritmo Urbano has expanded to have salsa and bachata dance teams in both Tampa and Jacksonville. Jorge is also the founder of BIG Orlando which will be held in February 2022.
2:00 pm -4:00 pm Juan Matos Afro Mambo Shines and Partnerwork
9:30 pm -10:30 pm Jorge Modern Bachata
10:30 pm – 2:00 am Social Dancing
Midnight Performances
Ritmo Urbano, Tampa, Florida
Brenda (Lola Rodriguez), Alberqurque, New Mexixo
Tickets can be purchased here
https://www.eventbrite.com/…/studio-d-christmas-party…
#ihearttally #tallahassee #florida #dance #salsa #bachata #latinnight #latindancing #party #christmas #christmasparty #holiday #holidayseason

WFSU Public Media - April 21, 2016
0
Here we have collected all of our Roaming the Red Hills EcoAdventure series for a special episode of Local Routes.  While we had to...

WFSU Public Media - March 19, 2020
0
In this episode, we explore non-traditional careers for women and efforts to preserve historic public squares in Apalachicola.