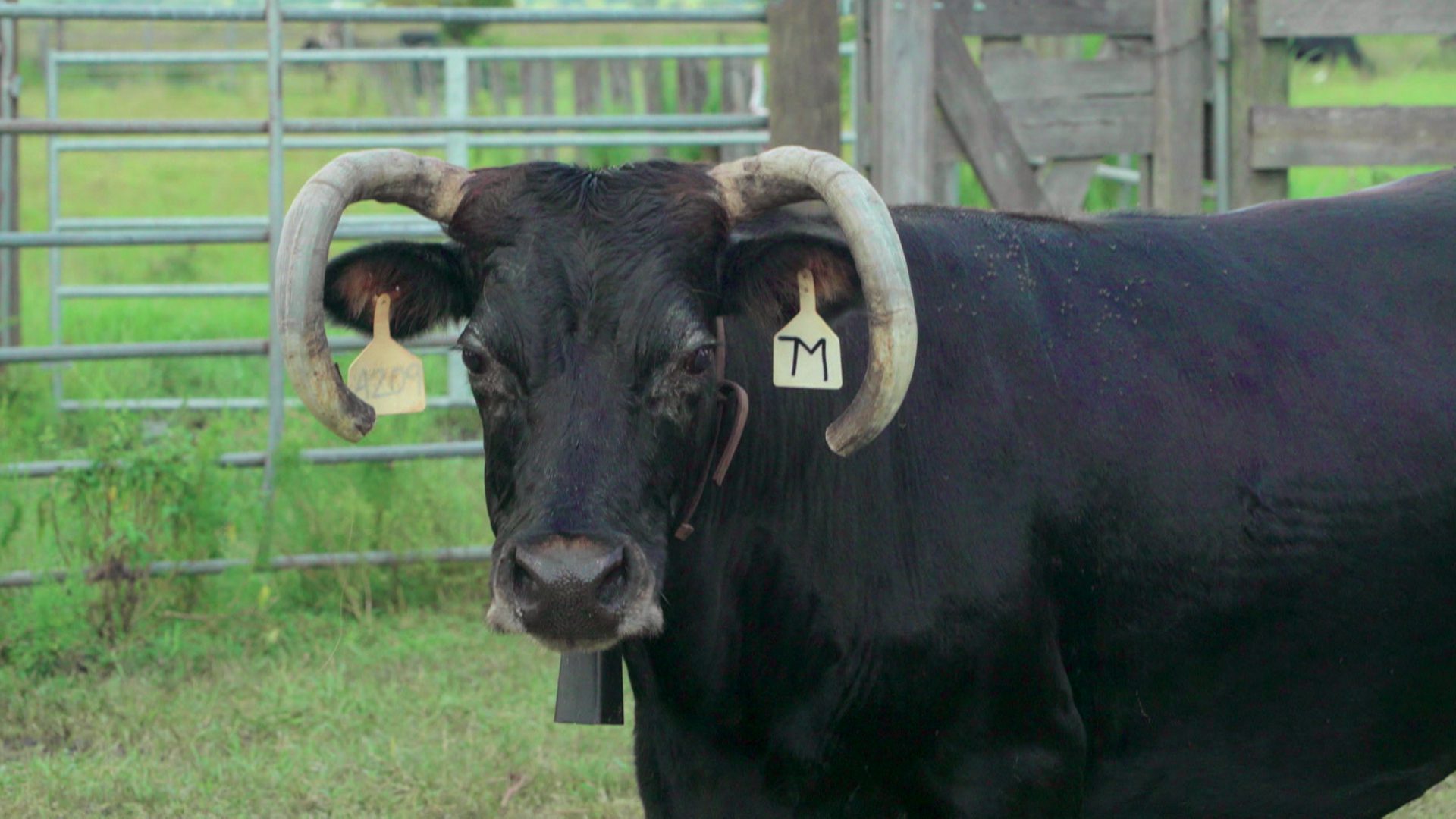 In this video, they introduced us to this queen of cattle in an extended preview from the film.  Cattle Rancher John Lipe tells how young Flossie first became a participant in the cattle drive.

“In 1995 she went on that drive as a about a 2-year-old heifer,” said Lipe.  “They had another drive in 06 and she was busy having calves then. We let her stay home.

Ten years after that, came another chance to take part in the 50-mile trek.   “When they had the one in ‘16, I had her and I said, you know, I think I’ll take that old cow,” said Lipe.

The rancher put a bell around Flossie’s neck so she would be easy to recognized and put her in the drive as kind of a novelty.  Lipe says she proved she was in good shape.  “She made every step of the way. Never had a minute’s trouble. She is a good old tough cow.” Lipe says fondly.  He says cracker cattle genetics are the key, “They have been developed over 400 years without man’s interference too much.”

Cracker cattle are descended from cattle brought over to Florida by the Spanish after Ponce de Leon first explore the region in 1513.   Lipe says that heritage is part of why he enjoys the drive.  “To be able to have these cattle in close proximity to where the cattle industry started, according to history, in the United States of America. It makes you feel good.”  Lipe continues, “They’re supposedly the first cattle that came to the country. To be part of it, and, especially, to preserve some of the heritage of it.”

Lipe says people keep asking him if he and Flossie are going to take part in the next cattle drive planned for 2021.  “Flossie and I will be there. She may have to ride in a trailer and I may have to ride on a jazzie or hover-round or something, but we’ll be there if we’re able.

You’ll be able to see more of Flossie Bell and the rest of the Cracker Cattle Herd in the premiere of “The Great Florida Cattle Drive: Unbroken Circles.”  The film debuts on WFSU-TV on Thursday, February 23, 2017 at 9pm ET.

Rob Diaz de Villegas - January 16, 2020
0
In an urban forest, trees are valued for what they contribute to a community. The southern live oak (Quercus virginiana) is a tree that...

WFSU Public Media - May 28, 2020
0
In this Local Routes segment, the historic St. Marks Lighthouse is lit for the first time by a lens in six years. Supervisory Refuge...